The 2018 class of Terry Scholars at UT Dallas includes the following traditional and transfer students: 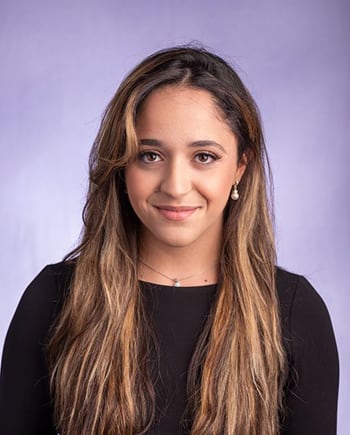 Mansfield High School, Mansfield
Raneem Albosstani, previously a Terry Scholar at the University of Texas at Arlington, held several leadership positions in high school including co-founder and president of the Marketing Student Association, as well as president of the Muslim Student Association and Bilingual Club. She was also community service project manager for CAIR-DFW refugee relief, as well as vice-president of leadership for DECA where she also won an award as a Top 10 marketing intern. Albosstani volunteered at Mission Arlington Health Clinic, Methodist Mansfield Medical Center, and the Medical and Dental Preparatory Association’s Homeless Outreach. She is majoring in neuroscience. 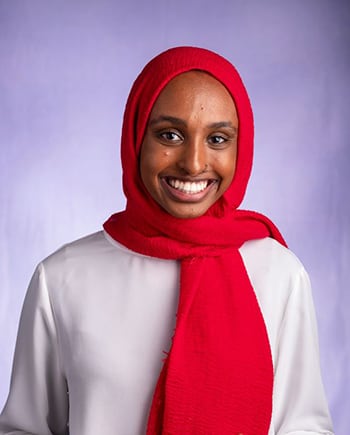 Wylie High School, Wylie
Gizman Baraso was an AP Scholar and winner of a Richland College STEM web design award. She was historian for HOSA-Future Health Professionals and the student liaison for the PTA. Baraso received the Rachel’s Challenge Community Service Award and volunteered for organizations such as the East Plano Islamic Center, Bilal Community Center, and Baylor Scott & White Emergency Center-Wylie. She is majoring in healthcare studies. 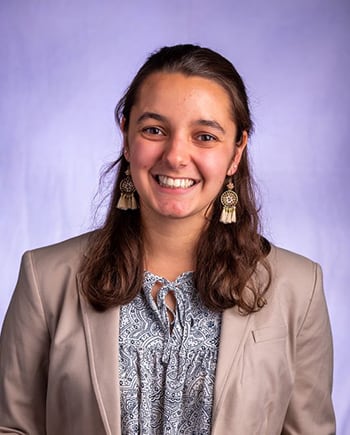 Northside Health Careers High School, San Antonio
Blanka Bordas was the section leader for the Youth Orchestras of San Antonio and president of her high school band. As a clarinetist, she won a gold medal at state in the solo and ensemble competitions. Bordas interned in a biomedical research lab at UT Health Science Center at San Antonio, where she measured autism-relevant behaviors in mice. She also volunteered at a public library in San Antonio. Bordas is majoring in biology. 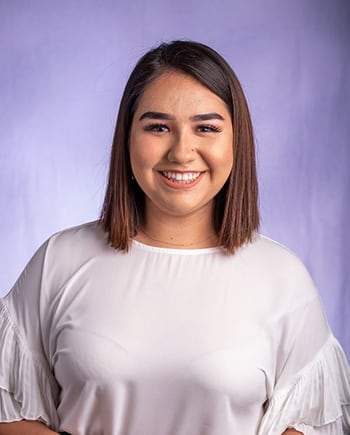 Incarnate Word High School, San Antonio
Divina Carrillo was an AP Scholar and poetry editor for her school’s literary magazine. She received the President’s Award for Educational Excellence. She was communications leader for the San Antonio Youth Commission, where she served on a panel for youth civic engagement at the MLK Youth Empowerment Summit. Carrillo also was zone leader for UT Health Science Center at San Antonio’s UT Teen Health program. She volunteered at Davidson Respite House for children with special needs, Christian Assistance Ministry, and Habitat for Humanity. Carrillo is majoring in American studies. 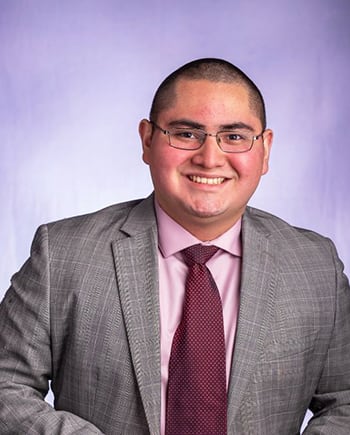 Northside Health Careers High School, San Antonio
Rene Davila was a member of the National Honor Society and Spanish Honor Society. He was president and founder of the audio/visual club, technical director of the International Thespian Society, and treasurer for student council. He was also a member of Key Club and HOSA-Future Health Professionals, where he advanced to state in the HOSA competition. Davila was a research intern in biomedical engineering at UT San Antonio. He also volunteered at Children’s Association for Maximum Potential for kids with disabilities and created Serenade Charity Music for nursing-home residents. Davila is majoring in biomedical engineering. 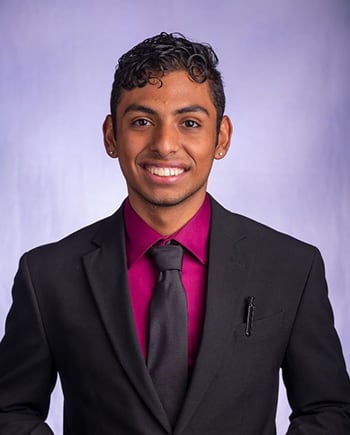 Carnegie Vanguard High School, Houston
Josue Fonseca was an AP Scholar, secretary of the National Honor Society, and treasurer of the Hispanic Honor Society. He also was vice-president of his school’s Amnesty International program, as well as founder and president of the school’s Red Cross Club. Fonseca was the sophomore representative for student council and a cello instructor. He also volunteered at Houston Methodist Hospital and helped administer a grant from the Environmental Protection Agency on water conservation. Fonseca is majoring in healthcare studies. 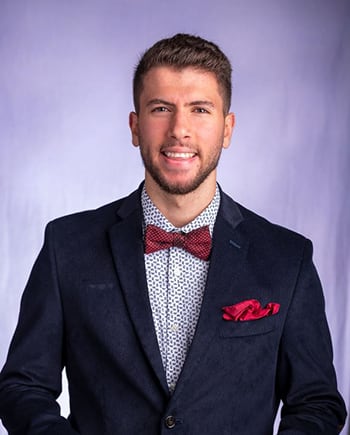 Lloyd V. Berkner High School, Richardson
Moh’d Hamed was a member of National Honor Society and on the Honor Roll. He also was president of Berkner STEM Academy and captain of the soccer team. Hamed was part of Young Investigators, an engineering program in conjunction with UT Dallas, where he explored pH indicators. He volunteered at robotics competitions, the Muslim American Society, and the Islamic Association of North Texas. Hamed is majoring in mechanical engineering. 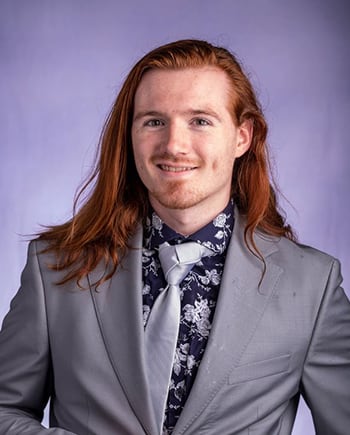 Home School, Rockwall
Bryan Jennings was treasurer for the National Honor Society and a member of Phi Theta Kappa. He also was team leader for water polo, where he was involved in the Olympic Development Program. Jennings attended cybersecurity summer camps at UT Dallas and won the GenCyber Award for Cyber Patriot IX. He was an information technology intern for Stream Energy and volunteered at churches as a math tutor, small group leader, and a team leader for Vacation Bible School. Jennings is majoring in information technology and systems. 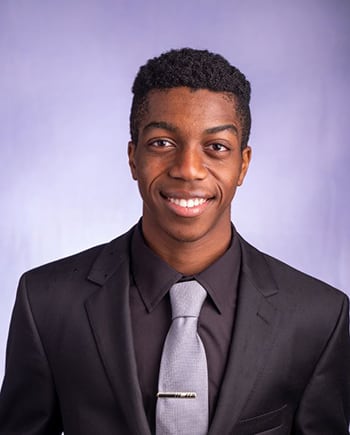 Frisco High School, Frisco
Prince Nze was a member of the National Honor Society, service project coordinator for the National Technical Honor Society, treasurer for HOSA-Future Health Professionals, and equipment team captain and service team for band at his high school. He also won awards in the Texas Music Educators Association All-Region symphonic band and wind ensemble categories. Nze volunteered with the band at churches in Frisco, the S.M. Wright Foundation and Frisco Family Services. He is majoring in mathematics and actuarial science. 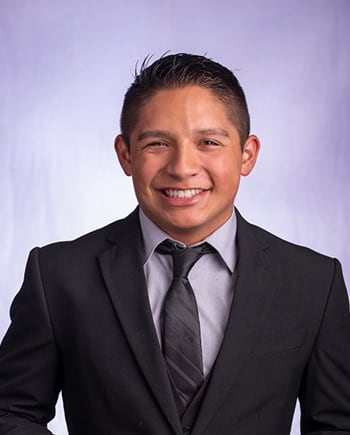 Maypearl High School, Maypearl
Robert Pinter was valedictorian and a National Hispanic Scholar. He was the University Interscholastic League regional qualifier for mathematics and science, and the Academics All-Star for the highest GPA. Pinter also was president of the National Honor Society, executive president and treasurer for student council, and captain of soccer. He was MVP for cross country and track, and placed first in all-district baseball. Pinter also volunteered as a math tutor and a coach for Midlothian soccer and softball teams. He is majoring in biology and healthcare studies. 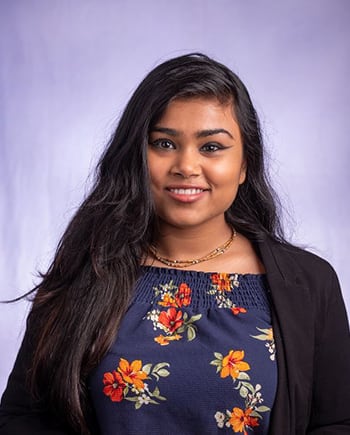 Creekview High School, Carrollton
Pranami Saha was an AP Scholar and a DECA state finalist and placed second in UIL for accounting. She was vice-president of the Math Honor Society and Key Club, president and treasurer for AVID (Advancement Via Individual Determination), and participated in The Be Project, a program of The Family Place that empowers youth to be part of the solution to end relationship violence. Saha also volunteered with various organizations, including the Carrollton Public Library and Texas Motor Speedway. She is majoring in accounting. 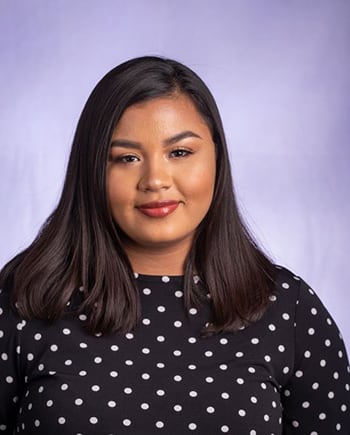 Sharpstown High School, Houston
Genesis Santos was valedictorian and vice president of both the National Honor Society and Key Club, for which she participated in volunteer activities at Westbury Park and the Willow Waterhole Music Fest, as well as post-Hurricane Harvey recovery work. She also was captain of the Apollo Tutors Club, where she tutored children at an apartment complex, and was junior varsity captain of the volleyball team. Santos is majoring in healthcare studies. 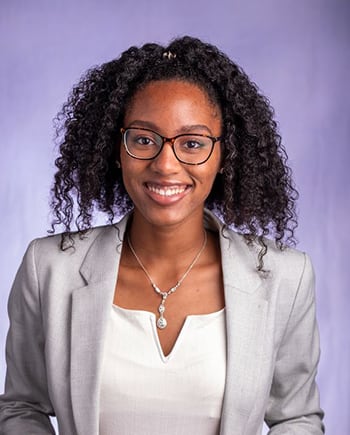 Clear Horizons Early College High School, Houston
Alex Saunders was a Superintendent’s Scholar and a member of the National Honor Society. She was president and co-founder of the UNICEF Club on campus, senior class secretary, and team captain for the tennis team. As a delegate to Junior State of America, Saunders traveled to Georgetown University to complete a government and politics program. She also was an intern at the South Belt-Ellington Chamber of Commerce, where she coordinated a health fair for senior citizens. Saunders is majoring in finance. 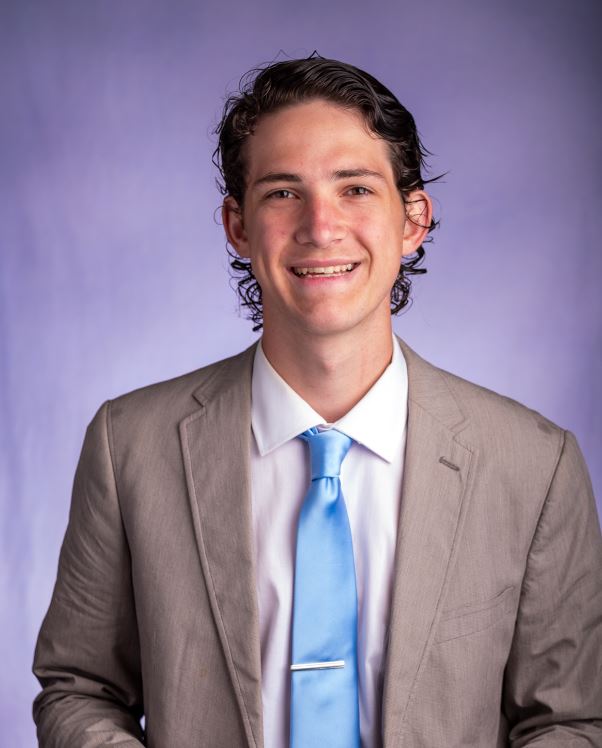 McKinney Boyd High School, McKinney
Matthew Winter was a member of the National Honor Society and a math tutor. He was co-president of the Chess Club and state chess champion through the Texas Charter School Academic & Athletic League (TCSALL). Winter also was vice president of Jazz Band and placed second at TCSALL for solo piano and for small ensemble. He volunteered with multiple organizations, including serving as a mentor for disadvantaged youth through Hope Worldwide camps in Dallas, Pennsylvania, and Hawaii. Winter is majoring in mathematical sciences. 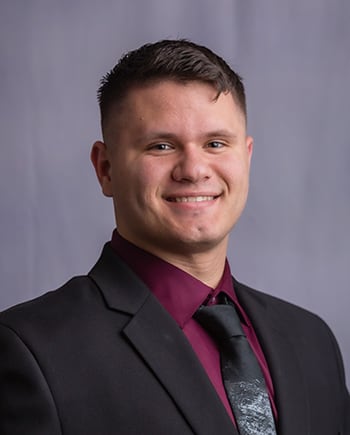 Richardson High School, Richardson
Daniel Wood, previously a Terry Scholar at Sam Houston State University, was a member of Alpha Lambda Delta Honor Society and was co-founder and vice president of Katatronix, a robotic engineering team. He is Autodesk-certified in AutoCAD and Inventor, where he used those skills to manufacture, design and build an air-powered engine. Wood volunteered at Camp Reynal (a camp for kids with kidney disease), Richardson Animal Shelter and Toys for Tots. He is majoring in mechanical engineering. 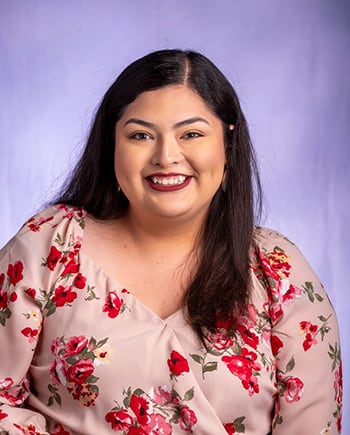 Eastfield College, Mesquite
Angelica Avila graduated with an associate of science degree, was on the President’s Honor Roll and was vice president of leadership for Phi Theta Kappa. She also was an investigator in the Young Women in Science & Engineering Program, where she designed a scientific project involving polymers that are synthesized for the purpose of drug delivery. Avila volunteered for Baylor Scott & White Hospital. She is majoring in sociology. 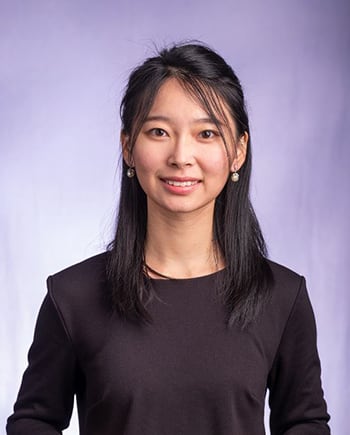 Houston Community College, Houston
Nianhuan Chen graduated with an associate of science degree. She was the recipient of the Clutch City Foundation Scholarship, which was established by Houston Rockets owner Leslie Alexander to provide help and inspiration to others. Chen was a sales assistant for the skin care company L’Occitane en Provence, and helped her team win a trip to France. She is majoring in computer science. 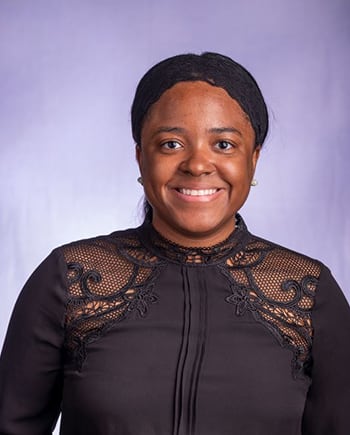 Tarrant County College, Arlington
Jade Montague was a member of Phi Theta Kappa and was on the Dean’s List. Montague also was a member of Student Leadership Academy, which helps students develop skills to become campus leaders. She volunteered for Mission Arlington and Habitat for Humanity. Montague is majoring in arts, technology and emerging communication. 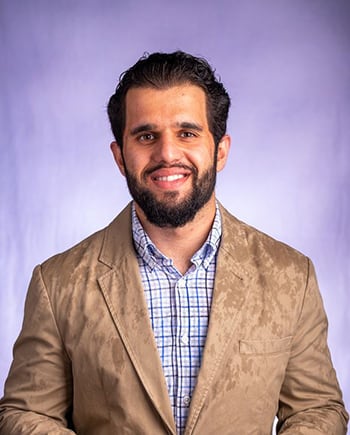 Collin College, McKinney
Basir Noory graduated with an associate of science degree and was a Collin College Board Scholar and Foundation Scholar for his academic achievements. He was secretary for the President’s Point HOA in McKinney. Noory volunteered at various organizations, including Habitat for Humanity and Catholic Charities. He also taught a personal finance class at The Samaritan Inn homeless shelter and English as a Second Language classes at a local church. Noory is majoring in information technology and systems. 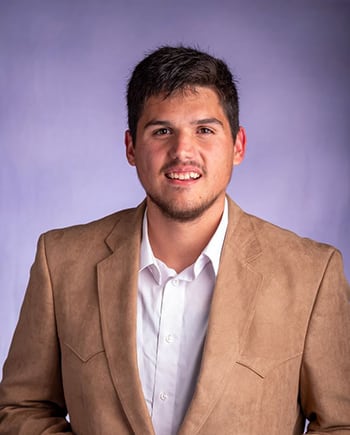 Eastfield College, Mesquite
Nathan Ortiz graduated with an associate degree in business and was on the President’s Honor Roll. He works in client support for a risk management and insurance brokerage company. Ortiz also volunteered at his local church. He is majoring in accounting. 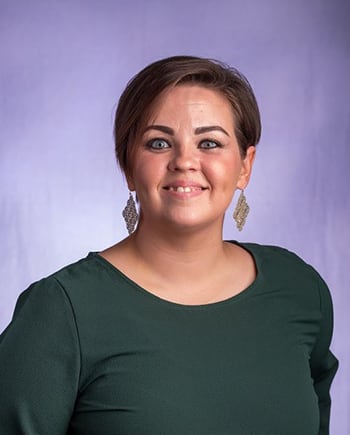 Collin College, Plano
Tiffany Page Carter graduated with an associate of arts degree and was secretary of the literary society, senior student editor for the literary magazine, a member of Phi Theta Kappa, and a member of LEAD, a student leadership empowerment and development program. Carter also volunteered with Talk About Curing Autism and created an online informational support group for parents of children with special needs. She is majoring in arts, technology and emerging communication. 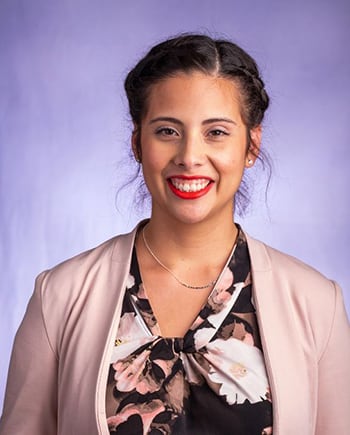 North Central Texas College, Gainesville
Itzel Tapia graduated with an associate of arts degree with honors. She was the chapter officer for Phi Theta Kappa and a member of the All-State Academic Team. Tapia also was a member of the Society of Women Engineers and the Society of Hispanic Professional Engineers. She participated in a research experience at UT Dallas that was funded by the National Science Foundation. Tapia is majoring in computer science.